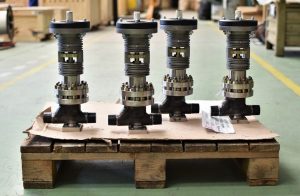 ARAKO valves meet the most demanding leakage requirements succeeding in full pressure hellium testing. Based on such results, the company can participate in construction of an experimental helix loop initiated by S-ALLEGRO, The Research Center of Řěž s.r.o.

„ ATEKO a.s. (engineering and complex turnkey unit supplier offering own products in chemical, engineering, food refrigerating, energy and environmental sectors) also got invited to take a part in the project, which set ourselves up for a quite challenging task.“ „The main requirement is to supply valves for helium with maximum leakage rate in working pressure class of 75 bar. This valve type has not been offered by any other manufacturer within the same industry so far.“ commenting Martin Klimša, Chief Designer at ARAKO.

Following the process of clarifying all technical conditions to meet the product requirements together with having to work under extraordinary conditions in aim to meet high quality demands of their workmanship, the design department had finally designed A10 – electrically powered shut- off valve with bellows (DN25 / PN160), primarily intended for nuclear power plants. “Shut-off valves with bellows produced as the only ones in Czech Republic have been produced at ARAKO since 70’s. They are installed to function safely in the most demanding operations, particularly in primal circles of Russian-style nuclear power plants in many countries around the world,” adds Martin Klimša.

A special requirement of ATEKO company was to conduct helium test at working pressure of 75 bar, however not just to comply with strength and impermeability of pressure envelope but also to pass tightness test in the closure. Based on customer’s requirement for working temperature of 550 °C and the standard valves design fitting only temperatures up to 350 °C, it was inevitable to come up with new A10 design and material modification. During the process, it was essential to invite bellows makers to perform new practical cyclical tests in accordance with prescribed parametres and check the overal life durability of bellows. Eventually, the tests were successful and ARAKO could launch the production of first 4 pieces of A10 valves.

Having to pass the final pressure helium tests carried out in a presence of customer representative, the valves were sucessfully executed in beginning of May. Moreover, the acknowledged acceptance of A10 types being fully compliant with customer requirements. ARAKO is now ready for further new orders.

What is GFR?
GFR (Gas Fast Reactor) belongs to one of fast IV.Generation reactors enabling to fuel cycle closing and offering remarkable increase of nuclear fuel utilization. Its development is monitored by EU SNETP platform under the initiative of ESNII. Between the main benefits of GFR belongs high outlet temperature of refrigerant (helium, up to 850°C), which can appeal to industrial applications such as hydrogen production. It should be generally acknowledged there has not been such a type of reactor built worldwide yet.

The main set goal of ALLEGRO project within the preparation phase framework estimated to be finalised in 2020, is now to implement as research as development in aim to bring a final decision making upon which of the central European countries the reactor development is to be potentially set in.
ALLEGRO key safety systems include Heat Decay Removal (HDR) to prevent melting in hot zones whilst in emergency conditions (eg. helium flow stops). For time being, the functuality of HDR system has been studied only theoretically in accordance with thermo-hydraulic programme.

For the above mentioned purposes, an experimental helium loop S-ALLEGRO development is said to be planned.This loop should fullfill two fundamental tasks – to acquire design and operational experience in using the equipment within ALLEGRO Helium Technology Testing Project. Furthermore it’s to be designed to support as an experimental research of HDR system as to become the first experimental device ever to be constructed for this kind of purpose.