ARAKO has been producing nuclear valves for 45 years 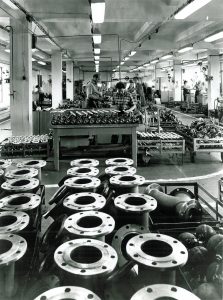 In connection with structural changes of the Czechoslovak industrial potential, in 1953 there was a significant reconstruction in Opava Minerva and production of a new assortment was started in the company. Special high-pressure valves for the energy, chemical and food industries have become a new production program.

Since the mid-1970s, Opava SIGMA has focused on the realization of another extremely complex task – the supply of special valves – the production of bellows valves made of carbon and austenitic steel with various types of direct and remote control for the construction of Czechoslovak nuclear power plants. In 1976, the development, construction and later the production of valves for nuclear energy DN 50 to 150 were started. Production was carried out on new machines – semi-automatics, automata, numerical controlled machines and other equipment located in extended and modernized plants.

Deliveries of Globe Valves with Bellows C23 for the Slovak Jaslovské Bohunice NPP and the Czech Dukovany NPP are also firmly connected with the period of construction of the first Czechoslovak nuclear power plants.

The Globe Valves with Bellows A10 are the second generation of globe valves with bellows,  replacing the original types C23 used in VVER and RBMK reactors. The new generation of bellows valves had to take into account not only the experience gained so far in the operation of the original types of Globe Valves with Bellows  C23, but also the newly issued nuclear standards of the Czech, Russian and European Union, which constantly increased the requirements for the safety and reliability of nuclear installations. The new generation valves have been tested in accordance with valid nuclear regulations in accredited nuclear research laboratories, where they have successfully passed tests of reliability by cycling, seismic resistance, resistance to thermal shocks and hydraulic tests. In addition to this full nuclear certification, the valves are characterized by low operating and maintenance requirements with easy access to the seat and plug, which reduces the time and cost required to perform a valve overhaul.