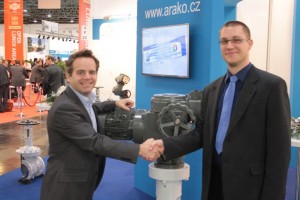 In January 2015, the company ARAKO spol. s r.o. (belongs to the engineering division of the corporation Rosatom – Atomenergomash) delivered forged gate valves S43 for a new customer – the company Valve Force, UK. ARAKO signed a sales representation agreement with this company for the UK market in December 2014. The delivery contained altogether 10 industrial valves, including two forged gate valves of DN 200/150, that were modified according to the customer´s requirements to the design with one and two bypasses, one operated by a handwheel and the 2nd one by an electric actuator AUMA.

The gate valves of DN 200/150 were designed for the pressure of PN 160, they are made of the material 1.7335 and determined for a project for biomass power plant in Birmingham, UK. This is the third order from the company Valve Force and there is a negotiation on further cooperation planed for following weeks. The expected result is to penetrate the British market and there is a prospect of new orders for high-pressure valves for conventional power sector for the future.