Kudankulam NPP was a significant contract for ARAKO in 2019 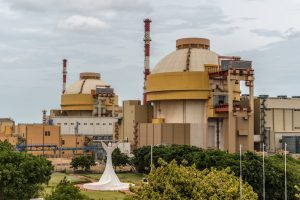 The Kudankulam Nuclear Power Station is connected to the network using two VVER-1000 pressure-temperature reactors, which entered commercial operation in December 2014 and April 2017. The reactors are complemented by innovative safety features that make this power plant unique among other power plants with VVER-1000 reactors.

India plans to build 4 more units in the long term, so that the total power of the plant reaches 6,000 MW. Both projects have already been signed between Nuclear Power Corporation of India Ltd. (NPCIL) and Atomstrojexport from the structure of the Russian State Atomic Energy Corporation Rosatom.

The construction of Units 3. and 4. follows the design of Units 1 and 2, with “improvements” based on the commissioning feedback and operational experience of the first Units. This year, ARAKO supplied more than 1,000 Globe Valve with Bellows A10 and A20 and Check Valve A30 from its portfolio of valves for nuclear power. High-Pressure Globe Valves with Bellows A10 and High-Pressure Check Valves A30 have been manufactured by ARAKO for almost 40 years. They have a long lifetime and reliability, which is guaranteed by the use of first-class material and consistent product inspection according to applicable European and Russian standards and regulations. The A20 Low-Pressure Valves have been producing for almost 20 years and the first deliveries of this type of valve were construction of Units 1. and 2. of the NPP Kudankulam in 2005-2008. The Globe Valves with Bellows A20 also meet the long lifetime, material quality and all applicable European and Russian standards regulations.

The completion of the nuclear power plant is also interesting for Czech suppliers, because it is actually being implemented and they already know it. Czech suppliers have experience with VVER-1000 reactors as well as with this power plant. The first part of the project included eight Czech suppliers, including company ARAKO, which supplied the first phaze with 1,500 pieces of shut-off and control globe valves.

In June 2017 was already signed a framework agreement for the construction of Part 3 Kudankulam NPP during the XVIII. Russian-Indian Summit held in St. Petersburg. Another signed document was an agreement about the provision of an intergovernmental loan, according to which Russia earmarked funds for the supply of components and project documentation for the 3rd part of the power plant.

ARAKO already signs other contracts for the supply of valves for construction of Units 5. and 6. Kudankulam NPP.