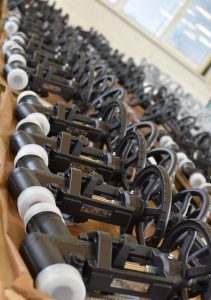 ARAKO in cooperation with OY Konwell won two important tenders for Finnish projects OEBIO OULU and PORI. At the beginning of August, after successful takeovers, it exported 280 industrial valves worth over EUR 500,000.

Finland currently operates one of the largest peat power plants in the world, the Toppila power plant in Oulu. The new 215 MW power plant will operate on the principle of multi-fuel combustion using approximately 70% wood, 15% recycled fuel and 15% peat, and will enter into operation between 2020 and 2021 after Toppila 1 reaches the end of its life.

In addition to lift Check valves and Swing check valves, ARAKO supplied 130 pieces of high-pressure Globe valves V46.2 of DN15-50, produced in the basic version with a handwheel and with electric actuator AUMA + AUMATIC. In addition, 90 pieces of Gate valves S38 were supplied in the basic version of DN80-500. Some types of gate valves of DN350-400-500 have been modified with an outer bypass and other gate valves DN400 have been extended with an extended spindle for remote control.

Another major investment in Finland, Pori Energia aims to increase the share of energy produced from renewable sources and thus reduce the current state of carbon dioxide emissions. At present, the main engine of the Aittaluoto power plant is two boilers and two turbines. With the planned investment of EUR 60 million, the older boiler and turbine in the main unit of the Aittaluoto power plant will be replaced with a new BFB boiler with back-pressure turbine. A 90 MW boiler will supply heat to the city of Pori, process steam to neighboring industrial areas and transfer power to the grid. This type of new power plant also plans to use biofuels, peat and high-quality recovered fuel.

For the construction of the new Aittaluoto power plant in Pori, ARAKO supplied 38 pieces Gate valves S38 of DN80-150-250 operated by hand wheel and electric actuator AUMA + AUMATIC. Especially for this action, one piece of Gate valve S38 has been designed as to be operated by a pneumatic actuator.

“ARAKO was helped to get projects by the fact that all valves are made of materials with European origin, which was one of the main conditions of the tender and we are glad that was offered just to us,” says Petr Hlaváč, ARAKO Commercial Director.